Kagami no Kuni no Iris -- An Unsurprising Non-surprise

When I see the poster, I was like, OMG Akira is writing something about SCP! Shit I’m gonna buy it! Wait, it’s only 330+ pages and costs 1200 yen! That’s twice the price of an ordinary lightnovel!

The price makes me hesitate for a while, but I bought it anyway.

I think it is inevitable to showcase SCPs’ effects when introducing them. We are reading a story, not just a piece of description. We expect to see SCPs in action, not in tales or behind hardened glass. So the choices are limited: we need them to breach, to break free, in order to unleash their full power. Keeping them in containment wouldn’t provide us much opportunity to diverge from the original description text and go further in terms of creation and originality. And that’s what their poster suggests, A large scale containment breach. 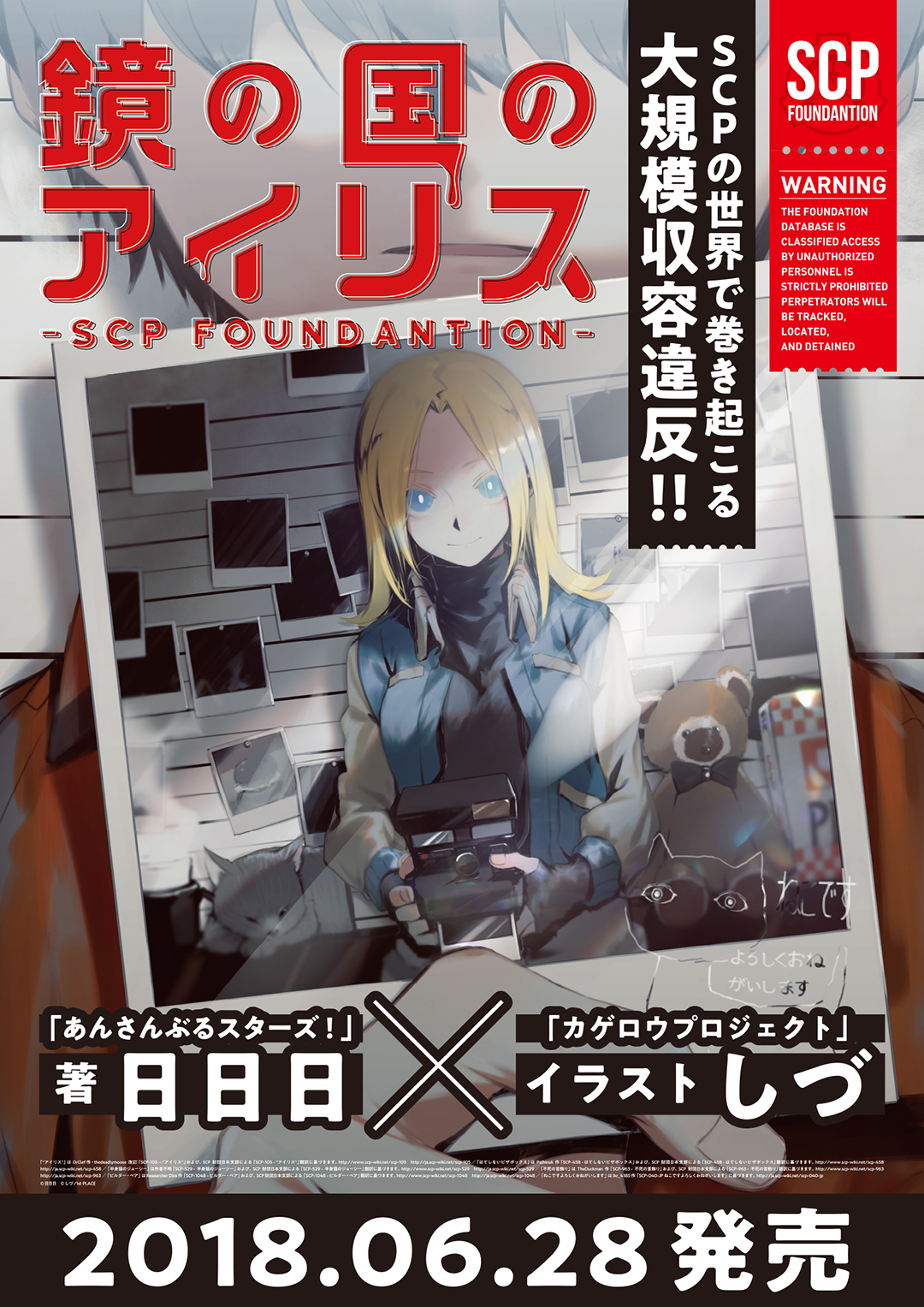 The poster from Bookstore Hifumi, before its release being delayed to Sept. 4th

Moreover, something deep in me is curious and excited to see a brand new breath blown into the somewhat gloomy and serious SCP objects. Akira is well known for writing abnormal things: he wrote for Yumenikki, and also that ECHO1 song by GUMI/Megpoid. Therefore, it is completely sensical for him to put his hands on the SCPs, which is also a symbol of abnormality.

Admittedly it is a hard take: you may end up with an amalgamate which lets everybody down and pisses off readers from both side. But it’s Akira we’re talking about, maybe he can make it. At least that’s what I thought when I saw him on the cover.

And here’s Shidu, who has made PVs for almost all Kagerou Project songs(some others done by the hands of Wannyanpuu), then the illustrations for the KagePro lightnovel. I just mention him by the way, though I cannot think of someone better than him to handle illustrations for cool things like the SCP.

That’s what I thought before reading it, and after reading, I would say: that’s what one would expect out of Akira.

The one and only good thing is that it is good for an introduction to the SCPs. In the novel, the specialties and backstories of the SCPs are carefully covered. Like how Iris discovered her ability, and the tragedy MTF Rho-71 “Origami Toads” encounters during their exploration of the carnival of horrors(SCP-823). And it even goes to length about what an SCP is, and what the Foundation is for. So almost everybody could enjoy this novel without looking up everything and wonder what on earth they are talking about.

Maybe it is also the reason for why almost all SCPs involved lie in the range of 000 ~ 999: they enjoy more popularity. However, it’s just a possibility.

But one thing a reader might notice is that there are some changes to the original SCP stories. For example, in the SCP-823 expedition, Akira saved one of the Rho-71 soldiers from forced sexual entry into the eye. Instead, he killed the poor soldier with a SCP-173 style neck-snapping by the hippo mascot, and then blow up the displaced head as if it is a balloon. It’s OK, since usually the mascots are the ones that hand out balloons to visitors. I guess Akira had to do it because “forced sexual entry into the left eye” may be too much for a casual lightnovel reader, let alone for himself to depict such a scene.

Something making me feeling unsatisfied is that we are dealing with safe objects most of the time. Except for the Teddy bear, the carnival of horrors, and Dr. Bright’s pendant, almost everything that plays a part in the story is safe. Some other unsafe objects, like the old man, the young girl, and the sculpture, are only mentioned orally.

And the most distressing part, there is no large scale containment breach as the poster boasted, which is a huge let down for me. Probably we can witness one in the sequel(it’s Kagami no Kuni no Iris 1, so there will probably be a 2, if the sale goes well of course). But first thing first, Akira needs to set up the stage, and Book 1 might serve such a purpose.

However, the book ends in a way that even if Akira won’t write a book 2, it will be still alright. To be exact, the protagonist, ███, is found a visitor from a parallel universe. His ability, with Iris’ help, makes this inter-world travel possible. In the epilogue "Milestone Iris, he’s sent back to world he belongs to, so the whole story is wrapped up where it begins.

It’s, well, not that bad. Everyone’s doing it. Even though I like the way of leaving a cliffhanger and keeping everybody in suspense, like what Falcom did with the Cold Steel, the reality is hard: one don’t know when he stops until he stops. There are many obstacles to the sequel: the sales, the reception, and the worse among them, the writer himself. And if one keeps the expectation too high and fails to answer it, it will be a hard landing. Although Akira’s nowhere near Hikari Sugii and Hitoma Iruma, he is still eligible for one of the guys who are the best to start a story, but the worst to conclude it. He’s not working on series(including the cases where he tried but failed) since the end of Sasami, which is Nov. 2013. So it might be hard for him to maintain the momentum and continue the adventure. So such an end may indicate his lack of confidence, or simply his lack of ideas for the second volume.

So the best we can do is to be patient and hopeful, to wait for the sequel of the story. I can give no final judgment until the final piece is in place.